As the heat rapidly reached 95 degree temperatures, so did the two cars carrying twelve members of the PACP, reach their destination. Their destination was none other than San. San is a town and commune and capital of the Cercle of San in the Ségou Region of Mali. San is the center of bògòlanfini production, a traditional Malian fabric.

PACP was there for one purpose alone and that was to make their mission of change for Mali heard.

Yeah and his party were welcomed with open arms. San is located 4 hours away from Bamako, Mali. Yeah left Bamako with his group in the wee hours of the morning. 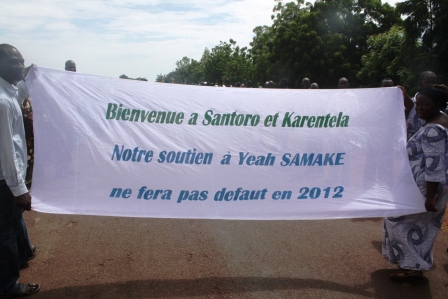 As soon as the party reached San, the meetings commenced. The party leaders met first, as is customary, with the dugutigi( the village chief). The dugutigi in his own way is a very powerful man and together with the mayor, these two individuals ensure that the town is run with order. Next, Yeah met with the Imam, the Muslim holy leader. 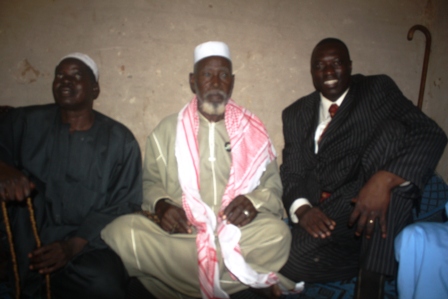 San is an important area in the campaign trail. As midday approached, the huge event that had been in the planning stages for 3 months saw light. Yeah and PACP were greeted with pomp and style. The crowds were an amazing sight to see. There were at least a 1000 people there and it was amazing to see a mix of old and young, middle class and poor, men and women that could be potential supporters. Even the mayor of San was there to welcome Yeah. I say that with some surprise as the mayor is of another major political party.

The event commenced with some good old African drums and dancers. Its hard to believe the energy that these individuals have constantly jumping around and moving simultaneously in 95 degree weather. The grioles came to welcome Yeah as well. The grioles tell stories of the person being honored. They almost embarrassed Yeah with their deep praises.You could almost see a black man blush 🙂 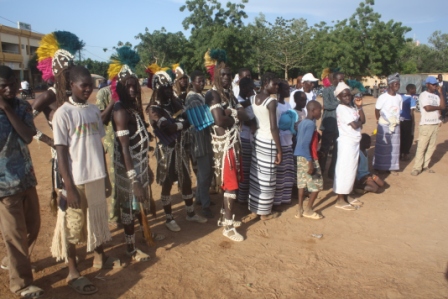 Then came the serious part of the event. The speeches resounded one common message. PACP was there to change things for the better. Mali is currently in a rut. No jobs, bad economy, bad education standards, improper medical treatment and a government that cannot solve the problems by the time they leave office. The key to some of this promised change is decentralization. The problem is that Mali is so vast and has so many regions that the central governments reach is ineffective. What needs to start happening is that power needs to be given back to mayors to properly manage their municipalities and then they need to be held accountable by the people of their municipality. If local government is successful in having a firm education system ( schools in the villages), better health care system and more jobs, then the successes will spread beyond municipality borders to the central government.

Speeches were given by Daouda ( Yeah’s brother) that had arranged the event in San, the mayor of San, Fomba ( Secretary General), Garba and Yeah. The message was urgent. This was not the time to sit by and hope someone else could save the country. Malians need to take a stronger stand in the coming elections. The constituents need to participate.

Garba speaks to the people of San 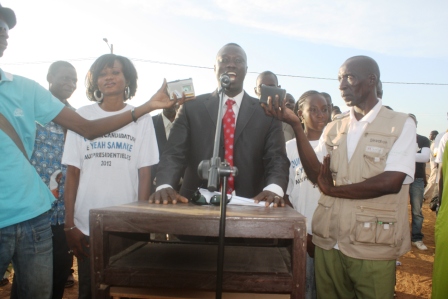 After the event, another get together was arranged between party leaders in San and the head office leaders. The message was to encourage a common message as Unity is essential to success.

Success to PACP as it continues to take Mali like a tornado gaining momentum. May the dreams of many Malians who want sound, principled leadership with results be realized with PACP. Support us at www.samake2012.com so that more events like this can happen.

Posted by Marissa Samake on September 28, 2011 in Past Posts

2 responses to “PACP makes its presence known in San”