The year 2012 has been a challenging one for Mali. Mali is already the second poorest nation in the world with issues in many sectors like healthcare, education and government. And if that is not bad enough, the coup last year has made matters worse. While Sanogo seems nowhere in the picture, it is not hard to see that not much happens without his approval. The Interim President Dioncounda is a President in name and more power lies with the Interim Prime Minister Django Sissoko, who so far seems as ineffective as his predecessor. December 2012 saw the resignation of the previous Prime Minister Cheick Modibo Diarra as allegations circled that he was advancing his own political agenda instead of focusing on resolving Mali’s territorial integrity and helping prepare Mali for elections. After months of negotiations, the UN Security council finally backed a resolution to send an African led force to Mali to unseat the rebels in the Northern regions. Unfortunately we have seen more Islamist attacks on areas that were previously held by the Malian army. Yesterday, it was reported that there was an intense battle in the town of Konna, a small town by Mopti.Today reports show that the Malian army was able to successfully regain control of Konna.

So what does 2013 hold for Mali? One only has to be living among Malians to know that Mali is suffering internally. While Sanogo was hailed as a hero immediately after the coup, public opinion in his favor is starting to waiver. The cost of day to day goods has risen significantly and in an economy that already had a 35% unemployment rate before the coup, things seem bleak. Tourism has suffered dramatically and many hotels/restaurants are feeling the pinch. The people in the North are suffering under the imposition of Sharia law. In addition, the refugee crisis seems forgotten. It has become an issue that has been put on the back burner while Mali’s inefficient government tries to figure where it is going and what it is doing. Yeah’s most recent trip to the camps in Burkina Faso last week revealed degrading conditions. One woman in the camp told Yeah that the refugees were tired of the situation and the conditions and just wanted to return home. A home of a united Mali, not a North run by extremists.

The international community is requesting elections in April 2013. Is this doable? Many politicians, who were running prior to March 2012, have now been imprisoned or have fled the country in fear of the junta. The large parties have had to find replacements that are relatively new and unknown. In addition, some of the prior candidates are serving in the current interim government making them ineligible to run in the next elections. Finally, much of the collected campaign funds were utilized prior to the coup and so more fundraising needs to happen to replenish this fund to campaign. Despite these reasons, it is good to see that many of the old corrupt politicians are nowhere in sight to run in the next elections and that much of what is left are younger politicians with newer ideas on how to improve Mali.

However, if we don’t have elections soon, we will not have a government that is recognized as a true democracy. When you have too many players determining policy, fighting to regain the North will become harder. When you have a central leader recognized and elected by the people and a government that responds to that leader, then you have a unified front to represent Mali and regain the North. With all the forces involved from the junta to the interim President to the interim Prime Minister, you have too many faces trying to call the shots and assert authority. Elections mean one authority, one government and a stronger face against terrorism. So if that means April, we will have to be ready.

Mali cannot afford another failed government. I believe strongly, that Mali needs leadership. The issues to date have been caused by a lack of leadership. First, by the former President ATT who was overthrown and who for 10 years failed to raise the level of living. Then by Sanogo who let key parts of the country fall to rebels, while he asserted control. Then by a puppet government which has not truly led. We need to look at what is being done for Malians. While so-called Malian leaders were floundering in their self importance, it was Yeah who was meeting with other Malian politicians trying to reach a consensus on where Mali needed to go. It was Yeah educating key African and Western figures on understanding the situation in Mali from Mali’s perspective and about what was needed for Mali. It was Yeah who was bringing attention to the refugee crisis and reaching out to external organizations to send food and medical care.  Malians need a leader who isn’t self serving. They need a leader that has proved that a Malian’s life is more important than lining their own pockets. Now it is just a matter of allowing Malian voices to be heard so that free and fair elections will be held.

People ask me all the time. Why are you here? Aren’t you afraid for your family, for Yeah? I would be a fool if I said I did not fear for my family and Yeah’s well-being. I do worry, but if we don’t take this opportunity to make a difference, then the fate of 15 million people lies in the balance. Our comforts and tension is nothing compared to the suffering that Malians undergo daily.

The only hope for Mali now is to hold elections and create a strong, unified government. If Malians continue to hope the solution will come from outside, it will be too late. The economy cannot take another year of bad news.

I believe that Yeah can bring change. I believe that this campaign is not about just becoming President of a country. Rather I believe that this campaign has become a quest to restore integrity to a nation and bring hope to a people that are suffering. Too many years have passed with the Malian people being marginalized. Things need to change. Yeah possesses the skills, education and integrity needed to lead Mali. He possesses the strength and diplomacy to unify the government and restore his country.

If you believe like I do, then support us. Become a part of Team Samake and see how you can help us in 2013 to unite a country and raise hope for the people of Mali. www.samake2013.com

The Samake2012 year in review

Posted by Marissa Samake on January 11, 2013 in Past Posts

Original Farm is teaming up with Samake2012 and has produced a limited edition T-shirt to help support Yeah’s efforts in Mali. There are just 3 days left to buy the T-shirt. Each shirt is just $20 ( +shipping)

Show your support today for a return to democracy in Mali by donating to support the activities that will create conditions conducive to hold free and fair elections in Mali.

Thank you for all your support. We cannot do this without you. 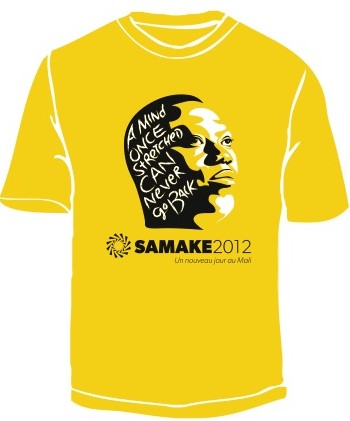 The youth from the different districts of Bamako came to listen to the PACP President speak of his vision for a stable, prosperous Mali. The youth represent an essential part of the voting block. Believe it or not, only 38% of the voting population voted in the 2007 elections. In a country of 14 million people, that is not only astonishing but also disappointing to see the lack of democratic responsibility. However when one sees the state of education, the economy and healthcare, one can truly understand how voting is the last thing on someone’s mind. The stakes, however, are even higher this time. With unemployment hovering at unimaginable numbers ( reported at 13%, but in actuality a lot higher), and the education system riveted with strikes currently, the Malian youth are suffering. Yeah spoke to the vision that PACP stands for. The PACP charter emphasizes the values of patriotism, citizenship, decentralization, freedom, democracy, human rights, and good governance. As Yeah spoke, his audience of youth remained quiet and attentive. He reiterated the need for Malians to come together and work towards a stable government. He also showed where Ouelessebougou was 3 years ago and where it stood today as one of the top ten cities instead of the bottom five. All this is possible for Mali. However Malians need a strong leader that is not afraid to take on the old system of corruption and self-service. This was an amazing meeting and an important one at that. It is the hope that the Malian youth will believe in their strength and voice. Their presence at the polls will be essential not only to PACP’s success but also to determining which leader will lead them to a brighter future. 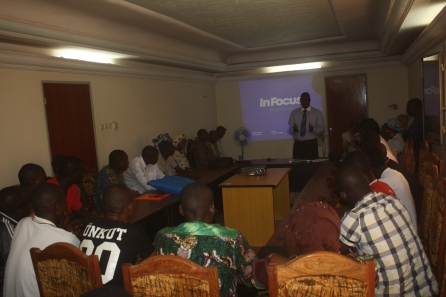 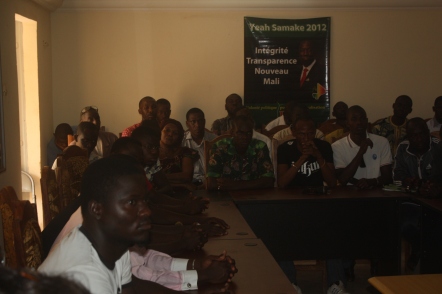 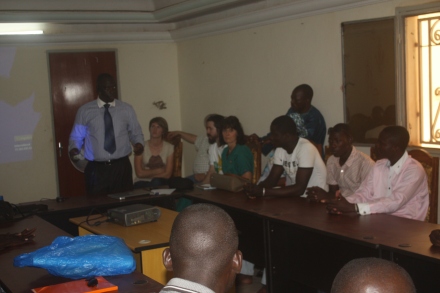 As the hot Malian sun bore down, about 100 Malians gathered in Commune V. The guest of honor was PACP President and Presidential hopeful Yeah Samaké. Surrounded by other party members, Yeah was welcomed by youth leaders in the commune. Also we had special guests from Utah, James and Shelby Arrington. James and Shelby are simply one of the sweetest couples we know and we are very ecstatic that they would come all this way to visit and lend their services on the campaign trail in Mali. 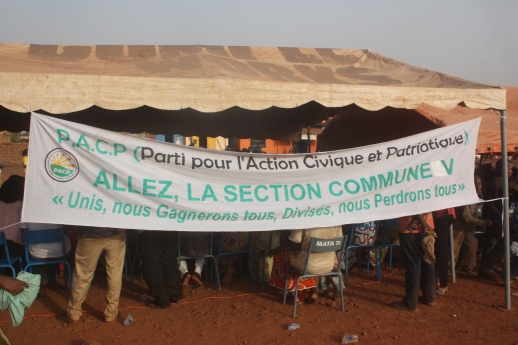 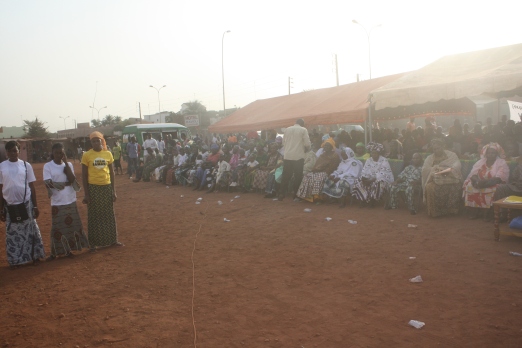 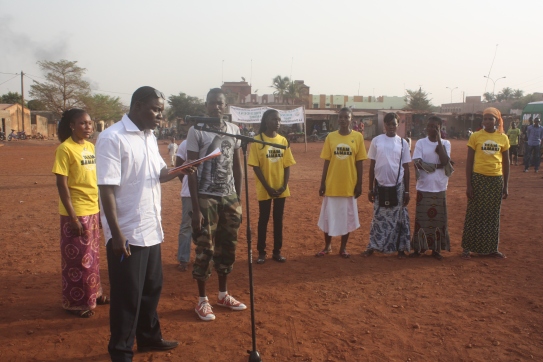 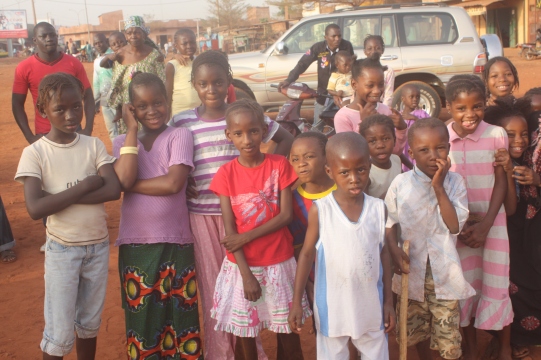 Party representative Bandiougou Soumaro, spoke highly of Yeah’s accomplishments and the hope that Malians could count on if they wanted a better life with more opportunities. This like all other rallies was accompanied by music and dancing. Some of the music was specific to Yeah’s accomplishments. I can’t still comprehend how a person can sing impromptu like that. The words just flow out of their mouths. We were then invited to witness a rare treat. James believes so much in this campaign that he has kindly allowed us to publish this in the hopes of raising money for Samake2012.I will let the videos below speak for themselves.

These two events are yet another indication of the growing support among Malians. Please support us at www.samake2012.com and help me bring the stability and the leadership that Mali desperately needs.

Posted by Marissa Samake on February 19, 2012 in Past Posts