This probably had to be the most nerve racking day since we left America to embark on this journey. Today, my little boy grew up just little as he attended French school in Mali. Keanen does not speak French and the kids that go to this school don’t speak a word of English. I guess I am just the kind of person that worries about everything. Like Yeah says to me sometimes, “You would worry if there is nothing to worry about”. I was terribly nervous for Keanen as he started Kindergarten today. I guess I would not be so worried if it had been in Utah. Oh who am I kidding? I would probably still worry. Keanen is my shy child and for him making friends is a challenge. I tried to excite him by having him come with me to buy his snack box and water bottle. That got him a little excited 🙂
Keanen’s school runs from 7am to 12:30pm. Already nervous, I woke him up at 5:30am. I felt so bad for him to wake him up that early. As we dropped him off, Keanen kept asking me if Carmen was going to daycare. I told him we still had to find one for Carmen. He kindly offered to come with me today and find one for her. After declining his offer, I tried to comfort him by telling him that I would pick him up for lunch. And then I did something I have dreaded since we came here and left him in the hands of a stranger. The whole morning my stomach felt hollow with anxiety for him. Keanen did better than I did. When I picked him up from school, he was so excited and jumped into his dad’s arms. His teacher was kind to advice us how we could help Keanen and we were also excited to learn that there was an English teacher that would work with Keanen for an hour each day. Keanen confessed to me later that his school had cool puzzles, play dough and blocks. He told me he had fun building a sand castle outside.
All in all, I was more nervous than Keanen. I am glad this day is over. I am sure I will experience it the first day he goes to Junior High and High school. I don’t know if I will ever worry for Carm like I do Keanen. Carm has her dad’s ability to take charge of any situation. I am excited for my little boy. He was very brave today. As a treat I took them swimming later. I am very proud of his accomplishment. Now hopefully, he will go tomorrow without a fuss. If not I will ship him to any takers. Anyone?? 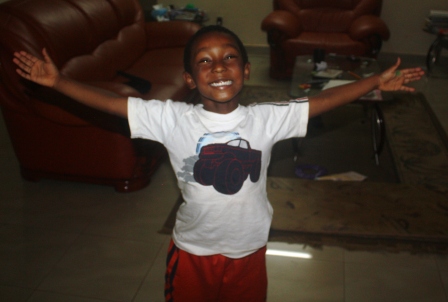 Keanen overjoyed at the end of day

Posted by Marissa Samake on September 5, 2011 in Past Posts