The situation in Mali remains precarious. Last night for the first time since the coup, there was news on ORTM, Mali’s national TV. In an attempt to preserve some sort of normalcy, one of the regular reporters reported the news in Mali. However one could see the lady reporter was frazzled. The report started by showing the current state of the Malian Presidential palace. As the camera zoomed on cars that were riddled with bullets, spent bullets on the ground and the Presidential office ransacked and destroyed, a sense of how real and dangerous this situation is was prominent. In addition the camera focused on military men armed with guns, in an attempt to show who was in control. The reporter also advised all parties running in the race to submit their declarations on the situation. In addition, people were advised that a big meeting would be held today to explain what happened and why it happened in more detail.

As the news wrapped up, the TV channel played movies in an attempt to calm the fears of the population and reassure them that normalcy would return. In addition, soldiers were ordered to stop firing in the air and to return to military barracks around 8pm. The night remained calm and for the most part the nation waited to see the outcome of this coup. The ex-President Amadou Toumani Toure(ATT) is reported missing and has not been captured by military leaders yet. Many ministers that served under ATT have been “detained” including Modibo Sidibe, who was a presidential candidate and the ex-prime minister that embezzled money from Mali. The airports and borders continue to be on lock down restricting anyone from fleeing the country. So far, the one thing that remains promising is the fact that no civilian has been harmed. Yesterday afternoon, spelled a different story, as military people looted the government offices and then attempted to stop cars to help carry the loot. Yeah, who was downtown, doing an interview with Al Jazeera, was flagged to stop in his 4×4. But his driver, encouraged by Yeah, drove past the man in uniform, who fired his gun in the air to show his displeasure. The two Mercedes behind Yeah were stopped instead. The situation has become very real and all this in just a day and a half. It makes you think that there is no control out there. As attention of the military is diverted here, MNLA in the North promises it will continue its advance for independence.

Here is the Al Jazeera piece that Yeah did:

This morning, you could still hear the gunshots ringing in Faladie. Yeah this morning with his advisors left to arrange a meeting with the leader of the military coup Amadou Sanogo. The focus at this point is to establish a peaceful relationship so that things may move faster in the direction of democracy. Also they will be giving their formal declaration to ORTM ( which is still controlled by the military).

It is in situations like these that I believe true leaders emerge. While half the parties hid away not wanting to get involved, Yeah, despite my deep anxiety, had issued his declaration condemning the coup and was already reaching out to the military leaders in charge and other national leaders attempting to see what could be done to restore democracy in a stable and peaceful way. The coup leaders have advised that the end goal is democracy and the elections will happen. However, no time or date has been set in stone. Currently the only promise made is that a government will be put in place on March 27th, 2012 and workers are encouraged to return to work or it will be considered job abandonment. There is no talk of who will hold what role.

It is sad to see one of the more stable democracies in Mali disintegrate after 20 years of hard work. It is almost like time has been turned back to the year of 1991 when the first coup happened since independence. The biggest difference is there has been no claim on innocent civilians. It is the hope that the military will honor their promises and hold the elections so that Malians may be able to choose their own leader and in turn their own destiny.

It is my hope and prayer that things stabilize. But more than that, it is my prayer that democracy is returned back to Mali. The Malians have enough pain and poverty to deal with and now insecurity has only been added to their plate of misery. It is my hope that all the refugees displaced by the fighting in the North will be able to return to their homeland. It is at times like these that I wonder what our children’s future holds when everyone can’t get along. Pray that this homeland can achieve the peace they so desperately need right now and the democracy and honest leadership needed to build a successful future.

God bless you and thank you for your continued support.

Neighborhood bands together to support their candidate 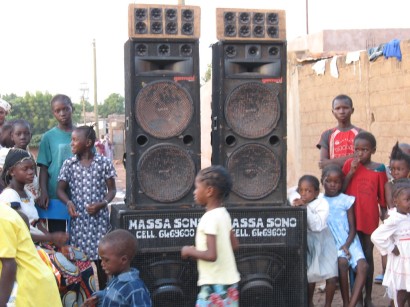 Look at those huge speakers!! Photo courtesy of tomathon.com

The first was a balani that was organized by Nana, our next door neighbor, to raise awareness about the presence of a presidential candidate in the street. A balani is a musical event in which a DJ is hired that plays music so loud that your heart pounds with every beat and your window shakes with every speaker tremor. Balani is a strain of Malian Coupé Décalé with little guitar, fast percussion and melodies played on the Balafon (Malian xylophone). Coupé-Décalé is a music style featuring mostly African instruments, deep bass, and repetitive arrangements. Music affects the very heart of Malian culture and is every bit important here as the busy social life. I remember my first balani two years ago. It was a very special event that was put on by Yeah’s family in Ouelessebougou to celebrate my arrival in the village.

This youtube video truly captures what the balani is all about: http://www.youtube.com/watch?v=iaiWl9Yz2uc

The Samake2012 balani was set to start at 5pm but like all good Malian parties started at 9pm. The music blaring invited the youth from ours and surrounding streets to see what all the noise was about. The youth put on several dances throughout the night rapping about PACP and Yeah. The DJ described Yeah’s efforts and the dream that Mali would be free of poverty and corruption if they elected a young leader who had the capacity to bring change. It was an awesome night!! Good heart thumping music, great message and a wonderful support from neighbors.

The balani gave rise to an informal meeting by the youth of the street who asked Yeah to come speak to them so they could see how to best help the campaign. It also provided an opportunity to Yeah to learn what further affects the next generation of Malians. The meeting was a success and provided additional much needed support to Yeah’s already growing campaign. 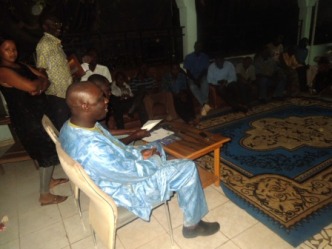 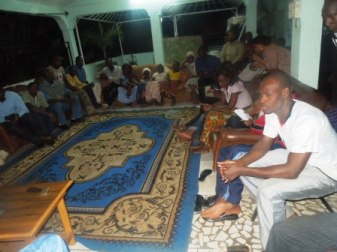 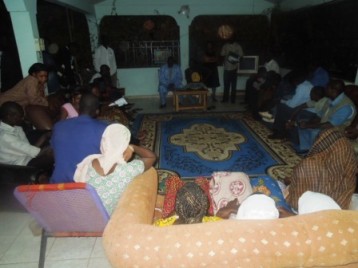 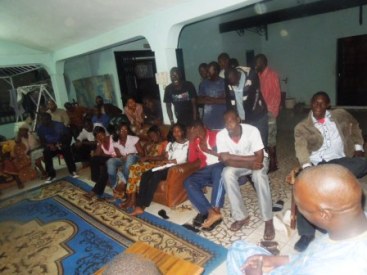 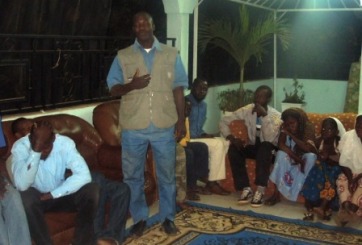 The political atmosphere is amazing right now. Things move so fast that each day differs in political achievements. PACP is becoming the theme of change and many Malian youth and middle aged individuals are seeing it as their chance for a changed Mali. We were blessed to receive the support of our neighborhood. May their excitement be replicated thousand fold through Mali as the election fast approaches on April 29th.

Posted by Marissa Samake on January 9, 2012 in Past Posts