A historic day for Ouelessebougou

On February 11th, the people of Ouélessébougou welcomed a very special guest. In the first visit of its kind made possible through an invitation by the Mayor of Ouélessébougou Yeah Samaké, the Ambassador of America to Mali, Mary Beth Leonard, paid a visit to Ouélessébougou. The visit was a chance to cement a strong friendship between America and Ouélessébougou. Ouélessébougou has been one of the few lucky villages that has received a lot of support from religious and nongovernmental organizations in the US. The visit also gave an opportunity to display Ouélessébougou as a model of success when talking about decentralization and transparent governance.

The people of Ouélessébougou showed up in droves to show their support for the Ambassador of a country whose people served them. The streets lined up with children and the people of Ouélessébougou as the Ambassador’s entourage pulled up. The representative of the Chief of the Village of Ouélessébougou welcomed the Ambassador and her delegation. He extended his deep thanks and appreciation for the support of America in Mali’s struggles and all the investments that had come to Ouélessébougou. The teachers association followed by thanking the Ambassador for the American investment in education. Speaking in his role as Mayor, when Yeah spoke he thanked the Ambassador for making the journey to come visit Ouélessébougou, emphasizing that there is so much to see and so much cultural beauty to experience outside of Bamako. He talked about America’s role as a great democratic country from whom Mali could learn many values of true democracy. He praised the efforts of America in coming to Mali’s aid and for providing financial and logistical support. He expressed his gratitude for the numerous NGOs, entrepreneurs and medical groups that visit Ouélessébougou from the US. Through their help, Ouélessébougou has received free healthcare treatment.

When the Ambassador spoke, she was very grateful for the opportunity to come visit Ouélessébougou. No other American Ambassador has ever visited the community and so this was a historic first for an Ambassador of America to set foot in Ouélessébougou. The Ambassador spoke of the friendship that Mali and America shares. She focused on education being the key to development and praised the community of Ouélessébougou for their unique citizenship participation in their government. Today, thanks to the clean, transparent governance, Ouélessébougou enjoys a 92% tax collection rate from its 50000+ population spanning 44 communes. The people have seen the benefits of paying taxes in the services they have received. The event in the main square of Ouélessébougou ended with a song by the famous Malian rapper Mylmo that got the children on their feet. My people were very excited to celebrate this unique, special occasion with the Ambassador and her delegation.

After the welcome celebration, the delegation toured the different sites in Ouélessébougou that have made the city a developing, moving city. We started by visiting the stadium that was recently enclosed. Before the youth would have no place to play. By enclosing the stadium, the Mayor’s office has introduced a place for our youth and also a venue available for rent where national/international games can be played. This will bring many investments and business opportunities to the area. Next on the tour was the new hospital that is under construction. The hospital when completed will be the biggest of its kind in the region. When the hospital is completed it will house a maternity center, emergency room, pharmacies, child care unit, dental clinic, eye care facility and healthcare center. It will be the only big hospital between Bamako and Sikasso, which is 7 hours away. This is an amazing facility and when completed it will bring accessible healthcare to the Djitimou area. I am excited for this sprawling facility to be completed! It will reduce the unnecessary deaths caused from distance to the next health center. Next, the delegation toured the famous solar panel field and were introduced to the inner workings of the facility.

After lunch, the delegation headed to the village of Ferekoroba to see the Empower Mali school that is currently under construction. While there, Yeah discussed the importance of education and the role American NGOs in contributing to Ouelessebougou’s education. NGOs like Building Youth Around the World(who donated $50K for the Ferekoroba school) and our foundation Empower Mali play a strong role in strengthening the weak education system in Mali. There is no investment by the government primarily because the funds do not exist. Hence the education system is severely affected and all the help these non profits give help raise the communities where they work. The Chief of the village of Ferekoroba was very honored to have the Ambassador visit his village and personally came to greet her and her delegation. The Building Youth Around the World Academy is progressing nicely and will be completed soon. This is the first building of its kind since the primary school was built in 1956.When completed, the government will provide teachers to the school. The children are very excited!!

The final step in this very exciting day was a visit to the village of Tenkele. While there, the Ambassador got to experience the beautiful folklore traditions of singing and dancing of the area. She was honored with songs and presented with a sheep by the people of Tenkele. Tenkele is one of the bigger communes under Yeah’s jurisdiction as Mayor. The people came out in great numbers to support their community and welcome the Ambassador.

The day was indeed wonderful and packed with many memories. The event was covered by the national TV ORTM and brought the accolades Ouélessébougou deserves for being such a beautiful, forward thinking city. This visit achieved its purpose to strengthen the ties between the US and Ouélessébougou and to demonstrate the fruits of a successfully run local government. The people of Ouélessébougou are better off today than when Yeah took office in 2009. They have clean running water, a clean source of energy, new infrastructure like school cantines and maternity centers, a new high school ( the biggest in the region), a new hospital under construction, a civil service department and an efficiently run Mayor’s office. The people have a renewed faith in their local government and an assurance that their tax money is not being eaten by their Mayor. It is this sense of citizenship that makes Ouélessébougou special. The Ambassador was quick to recognize all these accomplishments and extended a warm thank you to the people of Ouélessébougou and their Mayor for making the day so memorable. My people in Ouélessébougou will indeed treasure this historic visit just as much.

Welcome by the children of Ouelessebougou

The people of Ouelessebougou gather to celebrate 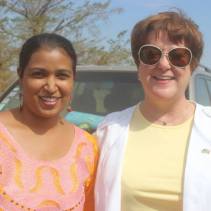 The First Lady of Ouelessebougou, Marissa Samake and The US Ambassador Mary Beth Leonard 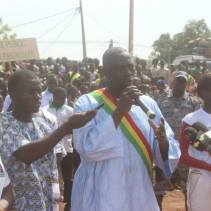 Speech by Mayor Samake on the historic occasion.

Presenting the Ambassador with a gift

Visiting the new hospital under construction

Visit to the Stadium in Ouelessebougou

Ambassador Leonard speaks to the population of Tenkele 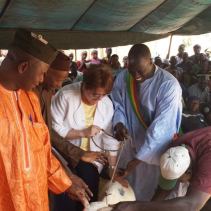 The population of Tenkele present a sheep to the Ambassador 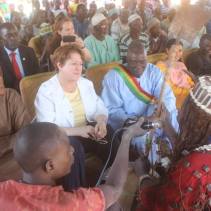 Listening to traditional folklore in the village of Tenkele

Visiting the Church in Tenkele 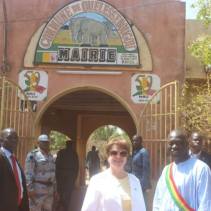 You can watch the National TV ORTM Coverage( in French ): http://www.youtube.com/watch?v=mOJpM4hKwrg

Posted by Marissa Samake on February 18, 2014 in Past Posts

One response to “A historic day for Ouelessebougou”