MALI COUP: The coup that brought democracy to its knees

Today, Malians will remember a very controversial day in its history. Today, Mali marks the one year anniversary of the coup that ended 20 years of a stable democracy.

I remember the day, a year ago, like it was yesterday. My heart is still scarred with the pain that surged through me as I watched the panic grip Mali. My stomach still recollects the feeling of fear and apprehension of the unknown. I still remember clearly, the days after as all of Mali seemed gripped, not knowing what to do or who was right.

On March 22nd 2012, the actions of a few would re-write Malian history. On March 21st, mid afternoon, a few junior officers, disgruntled with the regime’s inaction in the North of Mali against rebels, stormed the National TV station. For a day, the station’s channel stayed black interrupted only by hours and hours of Mali’s music. The air resounded with intermittent gun fire. Then at 4am on March 22nd, Mali’s immediate dilemma became apparent as the TV zoomed in on a group of officers with guns surrounding one man: Captain Amadou Aya Sanogo. Here was a man, Mali knew nothing about and in one fell swoop, he became the man of the hour. Till today, the controversies exist. Malians remain divided on where loyalties lie. Many Malians believe that Sanogo saved them from the plots of the government. Soon after the coup, rumors circulated that the deposed president Amadou Toumani Toure had in his possession the money and materials to promote and rig an election in favor of one of the candidates, Modibo Sidibe. This rumor was spread far and wide and is a common story given by those who support Sanogo and his actions. There are others that remain loyal to the previous regime believing that the soldier’s duty is to defend their country but under Sanogo’s watch, Mali lost a huge portion of its territory. 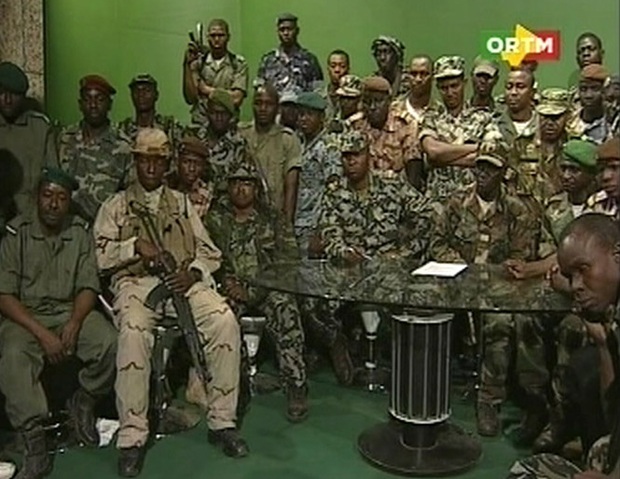 In the days that followed, the streets of Bamako reflected the days of the deadly student revolution of 1991. There was looting of the government offices and the presidential palace. Soldiers were confiscating vehicles and cars. In fact, some tried to stop the car Yeah was in but Yeah advised his driver to keep moving. The soldier was infuriated by this action and shot a round in the air, but that only made them drive faster. Political leaders joined the fray and Sanogo’s office was filled with many leaders that wanted favors in the new government.

March 22nd 2012: Yeah Samake meets with Sanogo to ask him to return power to the people of Mali

In all this, Yeah remained true to what he stood for. He recounts the day he met Sanogo for the first time: “I came walking through the crowd and went and stood in front of the office of the captain.  And he was just walking into his office and he said Mayor Samake!  He recognized me with perfect English, and I said ‘Captain, I have been waiting to get to see you for an hour’. And he said ‘Come with me.’  He said, ‘What has brought you here today?’  I said I came to ask him to turn the power back to civilians.  That power belonged to civilians and he needs to turn that back.   He looked at me and said, ‘Why have you come here to tell me that?’  To which I replied: “Because I know you love this country—you’re wearing the uniform. No matter what your motives are, I know you love this country.  And I love this country—I have sacrificed for this country.  So I am here to help you make things right.  If there is anything I can do, I’d be happy to help. He looked at me and said, ‘How? How do I do that?’ I said, ‘I don’t know, you will figure it out.’  As I walked out, he asked me if I would say something to the national television that he was in control of.  He brought in the camera and microphone and asked me to say something and he was probably expecting me to say something else.  I told to the microphone exactly what I had told him—that he needs to give the power back to the civilians and reorganize the military quickly so that Mali can defend itself.   He didn’t like that-he didn’t show that, that was censored. But this built a very trustful relationship between me and the captain.  He respects me, till today, that I had come and said this.  And he has turned to me several times, as a political leader, to solve some urgent problems that he couldn’t, or the military couldn’t.  So, he knows that everything I’m doing, I’m doing it for the love of the country, not for my own sake.”

Sanogo’s actions in the last year seem disjointed. While his initial actions seem to indicate a desire to rid the country of the old, corrupt politicians, his actions in the months that followed raise questions. The weeks that followed the coup were filled with many political arrests. At first we did not know who was getting arrested and on what basis. We did not know whether given his political status, Yeah would be next. All we knew was now was not the time to give up. If we gave up now, then we were not fit to lead this country.  Soon we found out that the people being arrested were former politicians that had stolen money from the country and army officers that had colluded with the deposed president. Through all this Yeah encouraged Sanogo to let these people go and ensure that Mali’s justice system handled it. Some were let go, and others fled in fear that they were next.

As Mali’s neighbors closed their borders, the country became afflicted with a fresh crisis. No one could get out and no one and nothing could get in. With the economic crisis looming, Sanogo was forced to let go of leading the country. After multiple backroom deals and with growing pressure from the West African neighbors, Sanogo announced he would step aside and allow the Assembly President to become the interim President as per the 1992 constitution. This was probably the best time to ensure that a government was put in place that would truly handle the needs of the Malian. What instead happened is the old guard, that was responsible for Mali’s growing economic and development issues, were put back into power under a different puppet. The current interim government is filled with the old guard of Mali’s failed democracy and continues to display the very reason why the coup happened. It is filled with bureaucracy and inefficiencies.

As part of stepping aside, Sanogo would receive full benefits as an ex-President, including but not limited to a house, constant security and money each month. For me, this was the part that first created some disillusionment about Sanogo. Here was a man who was saying he was doing this for Mali and suddenly, here he was taking from Mali. What separated him from the corrupt President he helped overthrow?

In the months that followed, Sanogo would show the country and the world just how much power he really had. The silent arrests continued to happen. In fact in December 2012, he demonstrated this power when he removed the Prime Minister (PM) Cheick Modibo Diarra from office. The reason explained was that the PM was attempting to run in the elections and was using his office and the country’s limited resources to do so. One of the pre-clauses of the interim government that Sanogo required was that no participant in the government would be allowed to run when elections were held in 2013. In a way, these actions restored some confidence in Sanogo. To Malians, he demonstrated that he had their best interests at heart and wanted to make sure the leaders in place continued to be held accountable.

To me when you think March 22 in Mali these days, Sanogo is the name that comes to mind. Most Malians regard him as a hero, regardless of what has happened. For me, I am more divided. Maybe it because I personally associate the rebels taking the North and the issues that followed as a byproduct of the coup.

All I know now, is that Mali cannot afford a failed government. Mali cannot afford another leader that takes away more than they give. Today, my heart cries when I see how the people of this country continue to suffer for the actions of a few. It breaks my heart to see how the deplorable economy continues to take away from the ordinary Malian. Before the coup, Malians were already suffering. After the coup, a year later, the suffering is intensified. Life has become harder for everyone. But the one thing I love about this country is its resilience and ability to continue to live life as fully as possible. Malians have and will continue to make ends meet the best they can. The coup awakened Malians to the realization that they had become too silent in allowing their government to run things.

Today the mood has shifted in Mali. There seems to be eagerness among the youth and the middle aged citizens, a majority in Mali, to stand up and fight for democracy in Mali. The elections in July are a sign that Mali and Malians are ready to return their country back to the people.

We are ready for this fight. The victory is not the elections. The victory will be getting Mali back on track and helping it attain greatness for itself and its citizens. Mali can be a great country. Malians have suffered enough and it’s time to get rid of the leadership that is dragging our country back into the pits.

We have a proven track record. All Yeah has ever done is give to Mali and Malians from schools to scholarships to medical missions to building a successful community in Ouelessebougou, which is ranked in the top 5 cities in all of Mali in terms of development, transparency and government.

We are fighting for Mali and Malians everywhere. Join us in our fight for this beautiful people and this wonderful country! Visit us at www.samake2013.com to find out how you can become part of the #MALIMOMENT

One response to “MALI COUP: The coup that brought democracy to its knees”