RSS
← Join Yeah Samake at an event in UTAH!
Interim President of Mali returns to Mali with new plan →

If you had told me a few months ago what would happen in Mali, I would not have believed it. The events that have unfolded since the March 21st coup were an awakening. An awakening that Mali was not as stable a democracy that everyone in Africa seemed to think it was and that Mali had fallen the hardest when it seemed the most stable. Since then Mali’s way of life and the uncertainty in government has moved Mali back 20 years. It is unbelievable that one man could change so much. There seems to be little political drama these days and calm seems to be on the surface. The African Union has since disregarded the agreement that was signed with Sanogo giving him ex-Presidential privileges. However it remains to be seen how much power they have to even enforce it.  It is easier to give something than to take it away once given. The ripples of dissent are there. People are unhappy with the way things are playing in the North. The latest attack on Mali’s national treasures has caused such anger that it makes me question humanity a little. Mali has gotten more attention from the West with the destruction of Tombouctou’s mausoleums to its Sufi Saints, a UN World Heritage site. If sites/things can get this much attention, how come 250000 displaced refugees cannot get a similar reaction. Have we come to a time in our history where human life is cheap and dispensable but historical artifacts are not?

The refugee situation is becoming worse and the situation will continue to degrade unless the security is restored in the North. People flee when conditions are not safe. The Malian government has been unable to re-secure Northern territory. In addition the destruction on World Heritage sites and the increased punishment under Sharia law has made people desperate. People are so frightened that they are willing to leave homes, land and family behind. Just last week, a woman carrying her baby on her back who was getting water was flogged by Islamists. Her crime? Her head scarf had fallen as she tried to fill water. Today, she and her child lie in a hospital. In other incidents, young men have been flogged for stealing or associating with women. The young men of Tombouctou and Gao are so angered by the situation that they have taken to the streets with clubs and machetes. However while they are bigger in number, they are no match for Ansar Dine’s men that are equipped with guns.  Something has to happen soon from the Government of Mali. We cannot lose the future of Mali. Ansar Dine has proven its original mission of its own state to ensure the Tuareg’s well-being is polluted with an agenda of terrorism.

In yet another move to progress Mali back to democracy, Prime Minister Diarra advised ECOWAS of a roadmap to ending Mali’s two big issues: terrorism in the North and ability to hold credible elections after the one year transition. There is talk of creating more opportunities for political actors from other parties so that government can indeed be more diverse. Diarra has said that he would welcome the 3000 ECOWAS troops only if they were to rid the North of terrorists.  If all is kept on schedule and the new plan accepted then Mali would be on course to hold elections in May 2013. One of the biggest issues in Mali today is most political parties feel excluded from the government; hence instead of supporting Diarra they are constantly opposing his policies. If a government were created that held no majority, while it would bring in differing agendas, it will also give political parties the chance they seem to be asking for to make a difference. Hopefully, it will not become yet another political circus. Yeah has constantly called for a national unity government to be formed but has also cautioned against furthering personal agendas. He said in a recent debate:” When a nation is faced with its survival it must act in unison. The quarrels of interest will always exist but the existence of our territorial integrity must come before our partisan interests”.

Many people have asked us whether we plan on dropping out of the campaign. Giving up on Mali is not an option for us. Our efforts will be focused on making sure the right things happen for the Malian people in terms of getting refugee aid and contacting governments to advise them of how they can help.

It is essential that national unity be achieved first so that international support will return. Then a better equipped army can be deployed that has confidence in their leaders. After that the North can be regained and the terrorists kicked out. If we don’t do that soon, it may be too late. The time has run out and enough is enough. Once security and safety returns to the region, the refugees will return home.  Mali cannot afford another blunder. We are on the right path, but it is moving slowly 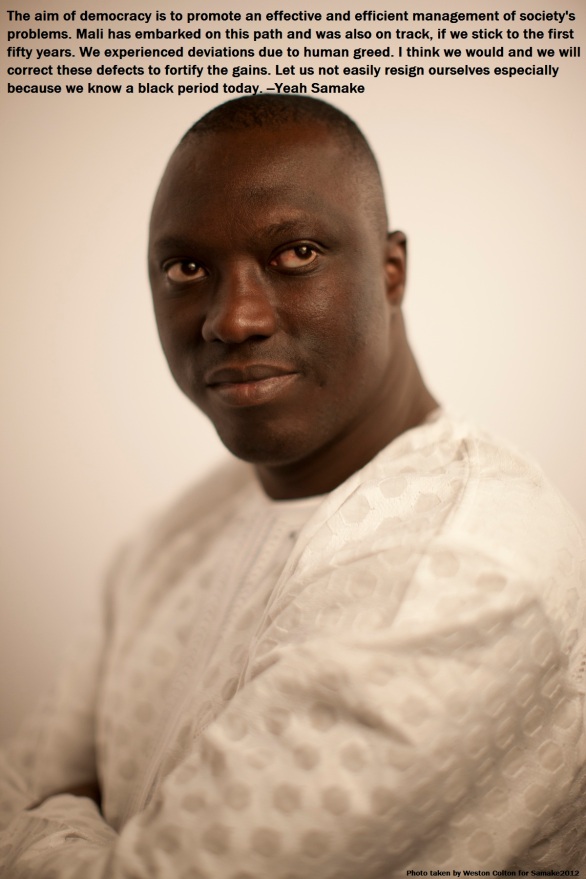 ← Join Yeah Samake at an event in UTAH!
Interim President of Mali returns to Mali with new plan →

One response to “Guiding Mali forward”