This weekend has been long and relaxing. With Yeah being back in town, we decided to escape the busy political mess of Bamako for the quiet of Ouelessebougou, where Yeah is still the Mayor. The kids have been extremely excited that Yeah has returned, especially Carmen who now has her teasing partner back. However, life did not get less busy for Yeah as his mayoral duties reclaimed his attention.

The changing weather has aligned with the changing political scene. One day it could rain cats and dogs and the very next day the sun shines so brightly that the idea of rain seems unbelievable. However, the rain has brought some much-needed relief to drought stricken Mali and an early start to Mali’s rainy season.

But while the rain is much awaited and much-needed, the changing political scene has brought about controversial debate. On May 22nd, Mali’s interim President Dioncounda Traoré was to step aside and make way for a transitional president as per the constitution of Mali. Many in Mali’s political circle were in favor of a strict observance of the 40-day rule by DioncoundaTraoré because for many he represented the “old guard” that had failed to protect Mali’s best interest and instead lined their own pockets. 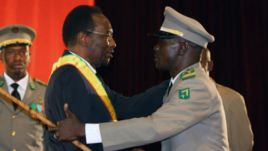 For a few weeks, there had been much debate between ECOWAS and the junta. For all their claims of giving up power, the junta has been very much involved in Mali’s political scene, going as far as to arrest politicians they believed to be involved in “threats” against the country. It is interesting to note also that in the past few weeks, journalists have accused them of threat tactics like phone tapping and arresting an editor of a local newspaper. The national TV continues to depict a very strong junta involvement, where they can be seen at events representing the government. ECOWAS was never able to provide the junta with a sense of security that nothing would happen to them if they left power. This may explain the junta attempting to maintain a very strong role in the government.

The debate has now been ended at least temporarily. A new deal was cut yesterday between the junta and ECOWAS. The verdict is that Dioncounda will serve the entire transition as the President until elections are held next year. This makes him ineligible to run for office when elections are held. However, who’s to say this will be honored. His role as President will remain merely as a figure-head. The country will be run by the Prime Minister Cheick Diarra and the transitional government. The interesting thing to note is that Sanogo has come out of this deal better off. As part of the deal, he has been given all the privileges that a former head of state would have like a lifetime salary, a home, bodyguards, and amnesty from criminal proceedings. Given that political leaders have not been involved in the mediation process, should a democratically elected president uphold these agreements?

All the while Sanogo has been stating how the Malian people are first and the minute a deal gets offered that favors the junta and primarily himself, he jumps on it. It is to be noted that the junta was under extreme external pressure from countries in the European Union, the African Union and the US. However, a majority of the Malian people have been adamant that Dioncounda not serve the transitional period as President. He has hardly done anything in the 40 days he has been in power. The North remains as divided as ever and if anything, terrorist groups like AQIM and MUJWA are only making themselves comfortable. The refugee situation gets direr every day and the aid is only getting to the boundaries of these captured zones.

Already, angry protesters have taken to the streets as of Saturday, expressing their discontent with the decision made. Members belonging to groups like APMA and other youth groups have organized a sit in at the monument of independence. Their claim is that they will not leave until Dioncounda leaves power. Today demonstrations continue as people express their discontent. There have been reports of disorderly conduct like burning tires and an atmosphere similar to that after the coup first happened. Dioncounda has been reported to be killed in these protests but there is no verification in that story or the many others that are feeding fuel to the flame. The one thing that is certain is that for most at this stage of the game, it isn’t even about Dioncounda anymore. Many feel like ECOWAS bullied the junta and ultimately most Malians into doing what they wanted done. However some also feel like the junta has let them down by giving in, especially in exchange for favors. 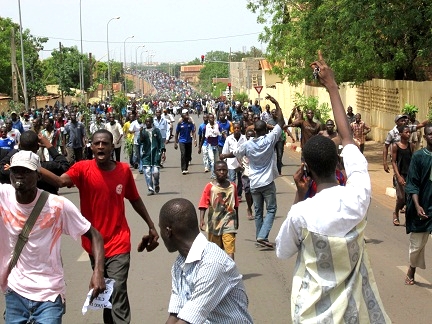 Courtesy of AP reporter Baba Ahmed : Protesters march on the royal palace. Look at the throngs of people

Hopefully, ECOWAS and the international community will correct their mistake quickly for the solution to Mali’s issues needs to come from Mali, not the outside. Only then will true democracy be possible. If the solution is a forced solution where the people feel like Mali’s junta are being held hostage to a decision, then the support will be limited. ECOWAS get Mali’s politicians and leaders involved in our country decisions before it is too late!

One response to “The rapidly changing political circus”