A picture taken at 10 in the morning.

For the past two mornings, Bamakois (people from Bamako) have woken up to an orange shade covering the entire city. It is such an unseen and unheard of phenomenon that I thought it blog worthy.

Yesterday as I and the kids played outside, I did not think or was not as affected by it. Today, however, things have taken a “dusty” perspective. The clothes hanging on the line gained a dust coat and even the leaves outside show a brown instead of the healthy green of two days ago. So where is this dust coming from? No one knows and Bamakois are a little perturbed.

Despite the strange weather pattern, PACP continues its onward goal to spread the word about their plans for Mali. A lot of good can come if Yeah becomes President. His plans for the education system, and healthcare system would bring relief to many Malians who need and deserve better health and jobs. 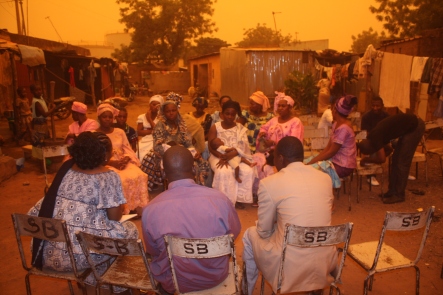 And while Mali’s problems can be resolved with stable, honest leadership, the dust storm looks like it’s here to stay a bit. This morning as we drove to school, we witnessed numerous motorists with their faces covered and young school children whose heads were covered with scarves. Even at Kean’s school, the usually filled playground was deserted. Hopefully this like all things will pass.

Makes you appreciate that breath of fresh air!

One response to “Orange skies”