The team returned from Koutiala, and after a brief rest, they departed for a rally in Commune III which is in Bamako. Yeah’s major support comes from the villages. Rural Mali forms a majority of the voting block. The newspaper L’Independant recently reported: “Yeah Samake is the candidate who goes to the small villages of Mali to live the life of the people. As the candidate of PACP, Yeah Samaké breaks the historical trend by campaigning in the villages. ” (  Boubacar PAITHAO, L’Indépendant du 28 février 2012; http://www.maliweb.net/news/politique/2012/02/28/article,51111.html)

It is important for PACP to make itself as well known in the city. The rally in Commune III was held to recognize Yeah’s candidature. This was a different rally of sorts in terms of the welcome given to Yeah. He was welcomed by 4 men wearing Samake2012 T-shirts and riding 4 horses. This was amazing to watch these horses herald in the PACP car. In addition to the horses there were 75 youth that honked their motorcycle horns to signal the arrival of Yeah. I kept expecting these horses to bolt, but the horses remained calm and seemed used to the ruckus that surrounded them. The people on the other hand were intrigued by the noise and came out of their houses to see who was passing. It was a welcome fit for a king and we were humbled by its grandiosity. 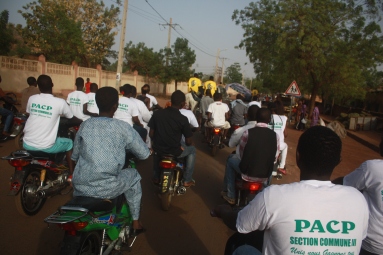 Look at those motorcycles!!

As the car neared its destination, four army personnel escorted it in. PACP volunteers lined up as Yeah got out. This was a big event and played host to 300 people and 100 volunteers. In addition, the national TV was there to cover the event. There was local talent followed by Petit Ballo, the Samake2012 singer. Liz attempted to get the crowd involved in the dancing and soon there was a good-sized crowd dancing to good music. PACP member Kane, who had arranged this event, spoke very highly of Yeah and his achievements. Yeah then got up to speak. He spoke with a power and passion that beleaguered his convictions. As he spoke, his audience sat raptured and made very little sound. He spoke of his desire to return to Mali to help his people and encouraged the people to vote for a leader that would truly serve his country. As Yeah was leaving, ORTM ushered him for a final interview.

The support is growing in Bamako. Commune III is an important section of Bamako. The support amazes us. The conviction of people in what we stand for grows. It isn’t ok for a child to not get a good education. It is not ok, for the healthcare system to be so inadequate that infant mortality sits at 111/1000 deaths and the average age is 52 years. We have been given much and to who much is given much is expected. We hope that we can be the light and solution that Mali needs. Mali needs a leader  that will be willing and able to resolve the issues ravaging its potential.

Please help us welcome a new day in Mali. We can’t do it without you. Its time to affect the future of a nation. It’s time to put corrupt leaders out of business. Are you up to the challenge? Show your support @ http://www.samake2012.com.

Posted by Marissa Samake on March 5, 2012 in Past Posts

One response to “Three cheers for PACP in Commune III(Trois)”