Diorila welcomes back a local favorite

As Team Samake arrived in the village, they were greeted by a horde of children and villagers who enthusiastically followed Yeah to the stage for the rally. 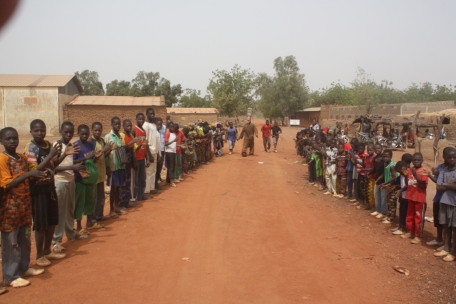 A large group of drummers welcomed Yeah while a man, wearing an intricately designed mask with beautiful red beadwork, danced.

There were about 150 people in attendance, including all of the excited children. As the event began, there were various dances performed by the women and the men in their own individual circles. Culturally, Malian men and women do everything separately in public. Our friend James and intern Kyle joined the African men by dancing with them in the circle. Check out their interesting contribution:

Numerous other performances were given by the drummers. The village chief then proceeded to introduce Yeah and other party members. Yeah eloquently spoke once again of a new day for Mali. After Yeah finished speaking, a special performance was given by local talent Petit Ballo who wrote a song about Yeah Samake. His support has brought an even greater enthusiasm to our campaign!

Listen to the song by Petit:

After the rally, Team Samake walked over to the MRF built middle school, Sue Taylor Middle School of Diorila, to visit with the children and see the condition of the school. The children were excited and crowded around the windows and every opening of the school. The people were excited to see the return of Yeah and anxious to see what else he could do for their village. 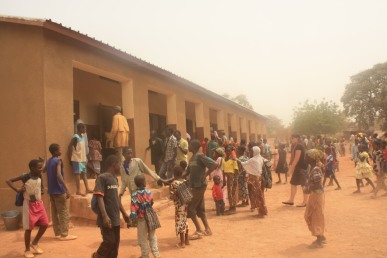 After lunch, which was generously provided by the villagers, there was a soccer game sponsored by PACP in a neighboring commune. The mayor welcomed Yeah. There were about 80 people in attendance. The imam and Chief of the village welcomed Yeah with a speech of support. Yeah’s councilor Broulaye Doumbia spoke to the people about Yeah and his accomplishments. He spoke fondly of Yeah’s character and courage to help his country.

The events were short but served its purpose of reminding the villages in this area of what Yeah has already done for them and can continue to do if he is elected President.

Posted by Marissa Samake on March 1, 2012 in Past Posts

5 responses to “Diorila welcomes back a local favorite”