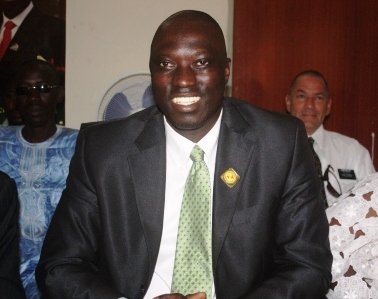 Utah has taken this campaign to new levels. The support this time has been so pronounced. Yeah has been fortunate to receive much media attention. The attention has been a blessing and the media on YouTube and news channels has breathed new life into this campaign.

The event held at the UCCU center in Utah last night was a success on so many levels. It was attended by a few hundred people and covered by KUTV news. Yeah was touched by the number of people that took time out of this busy season and showed up to support him. Some were good friends, but there were many that were there for the first time. Yeah at this event spoke about his life growing up in Mali and all the challenges and blessings he has had. He spoke of the dream to lead the people of Mali out of the grip of poverty and into the hands of comfort and development. If anyone can do it right, my firm belief is that Yeah can.

Yeah amazes me. While his strength, forbearance and go get it attitude make him hard headed at times (shhh…), it also makes him the man who has achieved so much in his short life. I have never known Yeah to waste any opportunity. When he became Mayor in 2009, many were skeptical including me.  What could a 40 year old do that a 60 year old mayor in office for 10 years couldn’t do? Yeah has proved all his critics wrong and introduced a fresh way of life in Ouelessebougou. When I came to Ouelessebougou in 2009, there was no running water in the villages and electricity was a scarce commodity. Internet was almost unheard off. Today, there are70+ water pumps all over the village. You never know how important water is until it is far away or unreachable. Internet has become more accessible and my internet actually works faster in Ouelessebougou than it does in Bamako. Solar panels provide electricity to generators for the whole village. Yeah’s achievements in making Ouelessebougou a modern city while maintaining the old traditions is noticeable. The people of Ouelessebougou truly love Yeah and the name Yeah Samaké is known through Ouelessebougou and surrounding villages. I am known as Yeah’s wife and only get special treatment when I say that. 🙂

If anyone can lead the Malian people out of poverty and provide opportunities, it is Yeah. Yeah truly loves his people and his country. The first thing he told me when we were dating was “I am going home when I graduate. I cannot have a wife that will not come with me. Are you with me?” How could I say No. Even then I realized the strength that Yeah possessed and the sweet nature that was important to raise a family. I knew I would never be in danger as long as Yeah was beside me. I want the Malian people to have the same comfort and strength that I glean from Yeah every day. I want the children of Mali to wake up and not have to worry about whether their school will be closed today because Mali teachers are on strike due to non-payment of salaries. I want children to maintain their innocence till their teens and not have to worry about that baby on their back or the 4 children they have to watch while their mother attends to chores. I want the woman to feel appreciated in society and help create job opportunities for themselves. I wish that all college graduates have a decent chance of getting a job so there is no need to resort to corruption. These are just wishes but without action they will remain a dream.

Yeah has single-handedly shown where he can move a community of 44000 people in just under 2 years. Imagine the changes his team could bring in a community of 14 million Malians in a 5 year term (10 if he is re-elected). Mali is as poor and underdeveloped as it was 51 years ago at Independence from France. Nothing much has changed as far as health care and education is concerned. It is time to reach the root of the problem which is to rectify the education system. Even as I write this, the Mali University is closed due to the teachers being on strike. At the village level, this has spread like a plague too. Why are they on strike? It is because the central government in Bamako is responsible for all teacher salaries and is too bankrupt to pay them. Do you blame these teachers? How can you when they have young mouths to feed. Nevertheless, it is the young, eager minds of Mali that are at risk. This strike which has continued for the last 4 months will put the students back 1 year. If Yeah were President, control would move back to the local governments. There the people would actively participate because they will have the ability to change the course. They will be responsible for paying teachers’ salaries. This will come from making sure people pay their taxes. If people know where their tax money is going (transparency), they will be more willing to make an investment in their children’s future.

The dream of affecting change has always been a priority that is more in reach than ever before.  Yeah is a good man and the people of Mali deserve a good person that has the strength to pull them out of the grasps of illiteracy and poverty. Yeah has made a believer out of me through the last 7 years of our journey together. I hope he can continue to affect peoples’ lives and I hope that people will be affected to support this honest, big-hearted man who could make a difference.

Visit us at www.samake2012.com to look at Yeah’s platform and join Team Samaké’s efforts to make Yeah Samaké the next President of Mali on April 29th 2012.

Posted by Marissa Samake on December 14, 2011 in Past Posts

One response to “A wife’s humble opinion”