Since his appointment as Special Envoy to the Prime Minister of Mali, Cheick Modibo Diarra, Yeah has indeed been one busy man. Yeah’s main goal as he has met with representatives from Bahrain, the US and Mali has been one and that is to create a common understanding of Mali’s current situation and how the present government is planning on creating political stability.

Yeah met with the Ambassador of Mali to the United States in DC, Al Maamoun Baba Lamine Keita, sharing his insight into the Malian situation and the reasoning for the removal of the previous President ATT. They also discussed the need for increased collaboration and understanding between the U.S. and the new government in Mali in the hope of removing sanctions against Mali, so that aid could once again start flowing to the people that desperately need it.

In August, Yeah visited Bahrain which is home to the US 5th Naval base, where he was received by members of the royal family. His visit allowed him to inform Bahrain of Mali’s situation and the need of investment leading to the creation of a bilateral agreement between Mali and Bahrain. Upon return to Mali, Yeah extended an invitation to former U.S. Ambassador John Price, who has been very engaged in African politics.  Ambassador Price visited Mali from September 6th-12th.

Ambassador Price’s visit was indeed an important one as it is important for people in the West to actually experience the situation in Mali rather than just read about it. Ambassador Price and Yeah got to meet with many key government officials in the defense, foreign and judicial sectors. Yeah was also able to secure a meeting with the man responsible for the mutiny back in March 2012, Captain Sanogo. You can read more about Ambassador Price’s opinion on this and other meetings on his blog: http://www.ambassadorjohnprice.com/captain-amadou-sanogo-a-hero-or-mutineer/2362/

Yeah and Ambassador Price also had the opportunity to visit the Malian refugee camp in Mentao, Burkina Faso. The visit will allow for a better foreign understanding of Mali’s actual situation and not as perceived by the media. 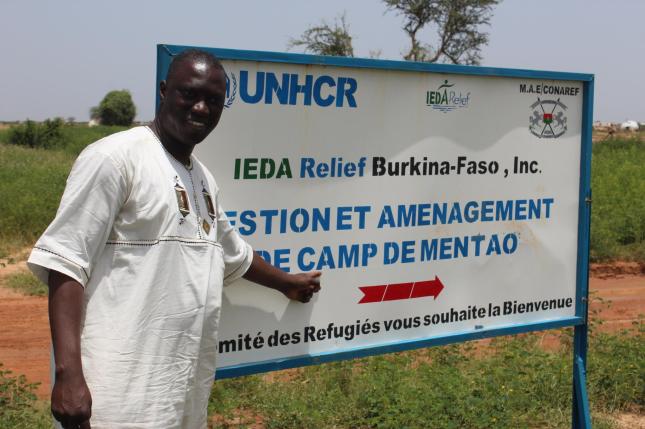 In Mentao, Burkina where we hope to distribute some aid soon

This past week has seen Mali put in a formal request for foreign troops from ECOWAS to come assist in the North. There seems to be a split opinion among Malians about whether ECOWAS troops are welcome on Malian soil. There has been a report stating that Sanogo and people close to him are against the decision by the President to invite foreign troops. The truth however is far from it, as Sanogo himself, appeared on national TV in an attempt to dispel these rumors. I guess time will show how the situation plays out. For now, there is no way for the Malian refugees to come back unless the North has been ridden of rebels. Each day there are fresh reports coming out that show atrocities in the North. Everyone is too afraid to go to that region and would rather desert everything for safety.

These past two and a half months have been busy as Yeah continues to reinforce the diplomacy and presence of Mali throughout the U.S. and other countries. The work is not over. It has barely begun and will continue until Mali once again is a democratic country.

We need your help. We cannot continue doing the things essential to restoring democracy without expending financial resources. If you can help support our work, then please help at http://www.samake2012.com. Mali deserves its chance at democracy and freedom.

( Thank you to Liz Jessop for helping me write this post :))

Posted by Marissa Samake on September 16, 2012 in Past Posts