RSS
← Getting Democracy back on Track
ADPS: A solution from within →

A Double Whammy: The North Falls and the Refugee Count Rises

As the weekend passed, the new work week invited new changes in Mali. Over the weekend, MNLA and AQIM made advances in the North and as Mali watched, the three biggest regions of Gao, Kidal and Tombouctou fell. This could have been possibly the worst thing that could have happened at this critical time. As soldiers found themselves ill-prepared and distracted, these rebels took over the North and the count of captured territories increased.

These takeovers further cement how inadequate this new regime is to handle the various issues of Mali. The very issue of the North that caused them to revolt is now biting again. In addition, we are starting to hear residents in those areas report that the Islamists are ordering Western pictures to be taken down and Sharia law is already being implemented in Timbuktu. As the reports of change came out of the North, last night the countries around Mali followed through on their promise of sanctions locked down their borders. Under the sanctions, the five neighboring ECOWAS members will close their borders with landlocked Mali except for humanitarian purposes. Its member states are to deny Mali access to their ports, freeze Mali’s accounts in regional banks and suspend Mali’s participation in cultural and sporting events. Also in the works, is the possible deployment of 2000 military soldiers from the neighboring countries. It is still confusing as to whether these soldiers will attempt to take down the military leadership or be deployed to fight rebels in the North.

Sanctions could be disastrous for Mai that relies on imports for most of its goods. The biggest one is fuel as Mali imports all its fuel from neighboring Ivory Coast. No fuel could spell trouble for gas stations and residents. Yesterday night, when the embargo was announced, people rushed to gas stations to fill up afraid that fuel would run out. Also with the banks being cut of the money supply, residents that rely on banks could be very affected. Most Malians however do not bank and so this might not be a thing that affects them. Rising food prices and things like cement and fuel being in short supply are more likely to happen as Malians adjust to the sanctions.

Sanogo, continues to say he will hand back power and in the face of sanctions, he continues to make these promises without attaching a deadline. Yeah continues to work with other political parties to make leaps and bounds that hopefully will see results. The hope is for Sanogo to cede power peacefully. Already Yeah and his team are in talks with the different embassies and also different organizations that can help facilitate this process. Now is the time for peace talks, not sanctions and threats. Now is also the time to start backing our army with better prepared and equipped outside forces so that the rebels do not decide to consider taking their offensive further south.  It certainly will back fire to have a radicalized violent extremist movement well rooted in Northern Mali.  This is bound to threaten regional stability.

If the sanctions continue, it could be disastrous. Already the Northern regions are experiencing deteriorating conditions. In addition to a drought and extremely hot weather, almost 200000 refugees are displaced by the fighting in the region. These individuals need help now. There are children that are dying every day because of inability to get food and water. The heat is unbearable and makes conditions even worse. April is the hottest month for Mali and here temperatures in the North easily reach 120F. Now more than ever, our Malian brothers and sisters need your help. We need funds that can not only handle the immediate concern of improving their living conditions. Once we have answered that need, a need to stabilize them in society becomes essential. 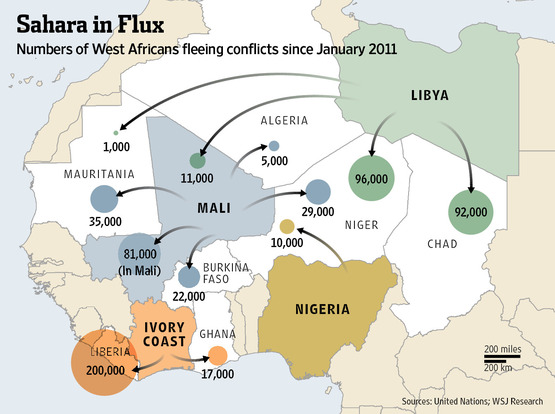 I have said it before, but I am compelled to say it again. People in the world need to realize that the refugee issue is not just a Mali issue; it is a human rights issue. We have refugees that are living in despicable conditions with little to no resources. Our teams have been attempting to raise refugee aid to help our displaced Malian brothers and sisters while the issue in the North plays out. We are calling on the international community to step up aid to these displaced people so that basic necessities like food, water and shelter are given them so that we don’t have a similar issue like that in Sudan and Somalia. Those interested in doing so through the Samake 2012 campaign may make anonymous donations to a trust that has been set up:

As soon as the current violence ends in the north, a new need will arise: Helping those who have been displaced to return and resettle into productive lives.  In East Africa, many displaced populations have suffered for years – prohibited from finding local employment near their shantytowns, they have become dependent upon western aid organizations. In some cases, these camps have witnessed second and even third generations growing up in these conditions.

Mali must be different. The people of Mali are strong and independent.   Beyond the immediate aid needed to sustain life, we also seek just enough aid to help families return to their formerly productive lives.

If you can help today, help make a difference. Every little bit helps.

Posted by Marissa Samake on April 3, 2012 in Past Posts

← Getting Democracy back on Track
ADPS: A solution from within →

4 responses to “A Double Whammy: The North Falls and the Refugee Count Rises”